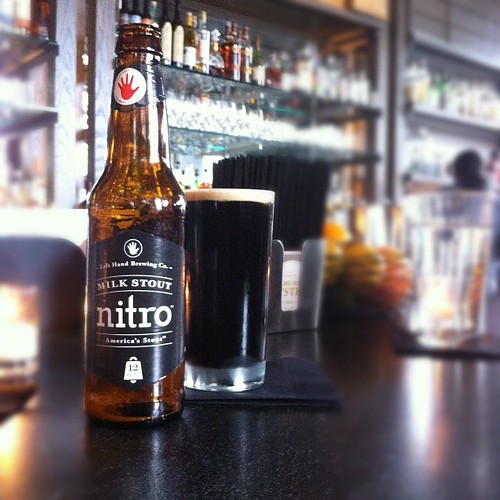 Photo by stevegarfield via Flickr, used under a Creative Commons license (CC BY-NC-SA 2.0)

This past winter, I got into dark beers like stouts and porters. Among the beers that I came across were so-called milk stouts. It seems odd to think of dairy in beer, even here in Wisconsin where each is enormously popular in its own right, but the name doesn’t lie. Milk or cream stouts are made with lactose, a sugar derived from milk. As Alisa Fleming explains, “Since the lactose is unfermentable, it adds sweetness, body, and calories to the finished beer, contrasting the roasted flavor.”

Look hard enough, and lucky vegans just might be able to find a milk stout they can enjoy. For example, Golden Road Brewing of Los Angeles makes an Almond Milk Stout as a limited release, which they describe as “a sweet stout with rich malts and almond milk in lieu of lactose, providing our Vegan friends with a tasty alternative to standard milk stouts.” Homebrewers also have tips on alternatives to recreate some of the characteristics of a milk stout without lactose.

Lactose as a beer additive isn’t nearly as strange as my recent discovery about Guinness, the world-famous stout. Rachel Tepper describes how a fish byproduct is used as a sort of processing agent in making the beer:

[S]ome vegetarian and vegan revelers might want to reconsider that thick, creamy Irish stout — it could contain trace amounts of fish bladders.

Smithsonian.com’s Food&Think blog published … an in-depth explanation of isinglass, a form of collagen culled from a dried swim bladder, an internal fish organ that helps regulate buoyancy in water. It’s used in a process called fining — when unwanted leftovers, like solid particles and degenerated yeast cells, are removed from the brewing process. These elements settle on their own to the bottom of a cask in a jelly-like clump, but isinglass quickens the process and makes them easier to remove.

The use of isinglass as a fining agent isn’t exactly new, and it’s not exactly news. While many beers and wines use gelatin instead of isinglass these days (those beverages aren’t vegan, either), Guinness still uses it in much the same way it has since the mid- to late-19th century. And publications and blogs have been taking note of it for some time now.

Still, it remains largely unknown to the greater public, likely because Guinness doesn’t publicize it.

For the full story and lots of links, head here. For more on vegan (and non-vegan) beers, check out this post from the blog of the “No Meat Athlete” (runs on plants!) and this one from the “I Think About Beer” blog.