Over the weekend, NPR ran a story from Deena Prichep on one of the original slow-cooked meals. As she describes,

Cholent is rooted in the Jewish Sabbath, which traditionally prohibits work from sundown Friday to sundown Saturday. Under some interpretations, this includes prohibitions on even turning on the oven or stove. So for those who want to have a hot meal (and many feel a religious imperative to do so), the solution is to set up a stewed dish cooking low and slow on Friday, long before the sunset. Over a day of slow cooking, flavors infuse, beans soften, and tough cuts of meat become tender. By the time synagogue services are complete on Saturday afternoon, the rich, flavorful stew is ready to ladle out.

For the full audio and text versions of the report, including the details of how cholent inspired Irving Naxon to create what would become the Crock-Pot, head here.

In our final retrospective (and my last post) of the year, I thought I’d offer a roundup of some “best of” lists that focus on food books. Whether you need a little reading material for yourself or a gift for a loved one, check out suggestions from

One book that I’ve been eying but just haven’t gotten around to yet is Candy: A Century of Panic and Pleasure by Samira Kawash. As Bridget Thoreson writes in her review for Booklist, “In this lively, engaging, and deliciously descriptive work, Kawash fills the gap left by culinary histories that don’t consider candy a food, revealing how the American mass production of candy in the twentieth century paved the way for the highly processed—and nutritionally problematic—foods we eat today. For a small, seemingly innocuous treat, candy has a turbulent history and much-maligned reputation.”

And if you just can’t wait another moment for some fresh reading material, check out Saveur’s 2013 Best Food Blog Awards, which includes worthy finalists and triumphant winners. This particular list is from April, so it’s not an end-of-the-year recap, but who cares? Good content is good content, and all the nominated bloggers would love to have you as a reader! 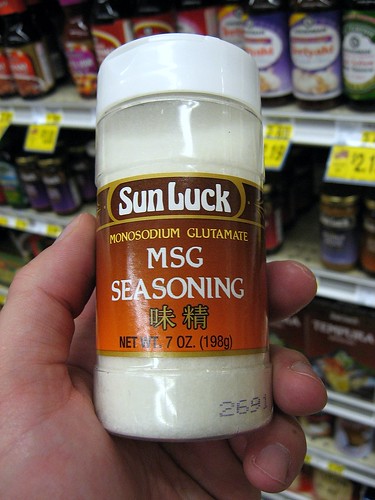 Thanks to an interview on NPR’s Weekend Edition Sunday, I discovered a recent blog post at Smithsonian by Natasha Geiling on the food enhancer monosodium glutamate. She takes us back to the discovery/invention of MSG and considers how its use and our views of it have shifted over the last century here in the US. I especially appreciated her connecting MSG to contemporary foodies’ love of umami. As she writes,

Few letters have the power to stop conversation in its tracks more than MSG, one of the most infamous additives in the food industry. The three little letters carry so much negative weight that they’re often whispered sheepishly or, more often, decidedly preceded by the modifier “NO” that seems to make everyone breathe a collective sigh of relief when they go out to eat. Nobody wants MSG in their food—the protest goes—it causes headaches, stomachaches, dizziness and general malaise. It’s unhealthy and, maybe even worse, unsexy, used by lazy chefs as an excuse for flavor, not an enhancement.

On the other side of the spectrum lies umami: few foodie buzzwords pop off the lips with such entertaining ease. Enterprising young chefs like David Chang (of Momofuku fame) and Adam Fleischman, of the LA-based chain Umami Burger, have built their culinary careers on the basis of the fifth taste, revitalizing an interest in the meaty-depth of umami. It’s difficult to watch the Food Network or Travel Channel or any food-based program without hearing mention of the taste wunderkind, a host or chef cooing over the deep umami flavors of a Portobello mushroom. Where MSG is scary, umami is exciting.

What few people understand is that the hated MSG and the adored umami are chemically related: umami is tasted by the very receptors that MSG targets.

The full post is worth a read; check it out here.

Thanks to Nicola Twilley of the Edible Geography blog, I learned of an interesting book that was recently published. Three Squares: The Invention of the American Meal—which Kirkus Reviews calls “a dense but enjoyable history of American food culture”—examines how breakfast, lunch, and dinner as we know them came to be. As an overview of the book describes,

In “Three Squares,” food historian Abigail Carroll upends the popular understanding of our most cherished mealtime traditions, revealing that our eating habits have never been stable–far from it, in fact. The eating patterns and ideals we’ve inherited are relatively recent inventions, the products of complex social and economic forces, as well as the efforts of ambitious inventors, scientists and health gurus.

the book’s lasting value, at least for me, lies in its reminder that the three-meal structure is “only a cultural heirloom, not an ordinance of nature” — and thus open to intentional reinvention, as well as reactive evolution.

For a teaser of the book, listen to Carroll’s interview with Virginia Prescott on New Hampshire Public Radio’s Word of Mouth. Then check out a chunky excerpt of Chapter 5 on the history of lunch at The Conference Board Review. 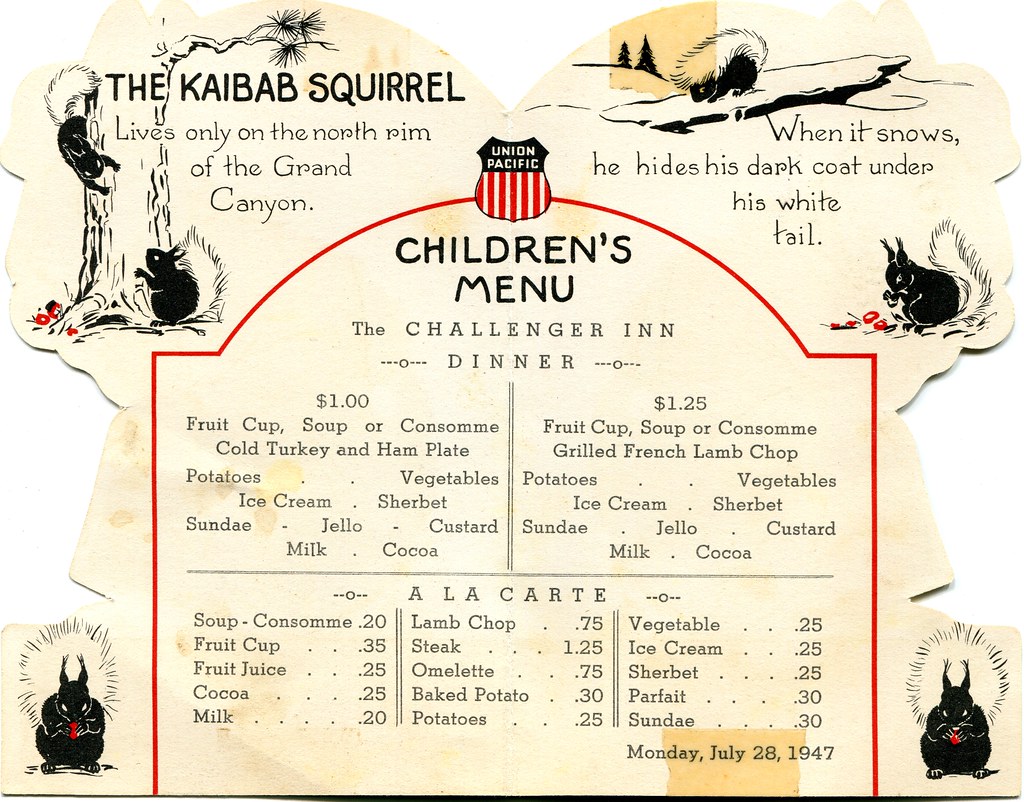 Last month Slate ran a fascinating article by Michele Humes that was subtitled “A brief history of the children’s menu.” A she describes,

When the English novelist Anthony Trollope toured the United States in 1861… he was astonished to see 5-year-old “embryo senators” who ordered dinner with sublime confidence and displayed “epicurean delight” at the fish course.

Prohibition spelled the end for 5-year-old epicures. Taking effect in January 1920, the dry laws forced the hospitality industry to rethink its policy on children: Could it be that this untapped market could help offset all that lost liquor revenue? The Waldorf-Astoria in New York thought so, and in 1921 it became one of the first establishments to beckon to children with a menu of their very own. But even as restaurants began to invite children in, it was with a new limitation: They could no longer eat what their parents ate.

Humes identifies pediatrician Emmett Holt as the the early 20th century’s chief designer of children’s nutrition guidelines, a “hodgepodge of medicine and morality” that dictated to “mothers, nurses, and, apparently, chefs that young children were not to be given fresh fruits, nuts, or raisins in their rice pudding. Pies, tarts, and indeed ‘pastry of every description’ were ‘especially forbidden,’ and on no account were such items as ham, bacon, corn, cod, tomato soup, or lemonade to pass a child’s lips before his 10th birthday.”

The full article is well worth a read, especially since it encourages a questioning of the current state and continued existence of the children’s menu. Check it out here. 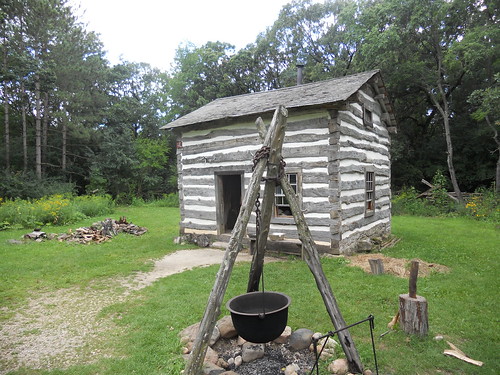 The living museum features more than 60 buildings gathered from around Wisconsin to form a crossroads village and a series of ethnic farms. The complex makes up one of the world’s largest facilities dedicated to the history of rural life, opening in 1976. Each building was painstakingly dismantled, shipped to [Old World Wisconsin] and then rebuilt and opened for exploring. All this is only about a hour’s drive west of Milwaukee, tucked into the flower-bedecked Kettle Moraine countryside.

There are all sorts of historical tidbits waiting to be discovered. For example, at the Schulz farm representing the 1860s, “you won’t find tomatoes in the garden here; folks back then were still getting used to the notion that they weren’t poisonous.”

Listening to the Radiolab episode on “Guts,” I was reminded of Richard Wrangham’s great book, Catching Fire: How Cooking Made Us Human. (Both discuss William Beaumont’s research into human digestion with his patient Alexis St. Martin in the early 19th century.)

As described by Dwight Garner in his review of the book for The New York Times, Wrangham’s thesis is simple, novel, and compelling:

Apes began to morph into humans, and the species Homo erectus emerged some two million years ago, Mr. Wrangham argues, for one fundamental reason: We learned to tame fire and heat our food…. The energy that we formerly spent on digestion (and digestion requires far more energy than you might imagine) was freed up, enabling our brains, which also consume enormous amounts of energy, to grow larger. The warmth provided by fire enabled us to shed our body hair, so we could run farther and hunt more without overheating. Because we stopped eating on the spot as we foraged and instead gathered around a fire, we had to learn to socialize, and our temperaments grew calmer.

The book isn’t without it’s flaws, but it’s well worth a read. If you want to get a flavor of it, check out Garner’s review, Christine Kenneally’s review at Slate, and especially Wrangham’s appearance on NPR’s Science Friday.

The Conscientious Omnivore is away. This is an encore presentation of a post that originally appeared in slightly edited form on June 18, 2012.

Photo by BlakJakDavy via Flickr, used under a Creative Commons license (CC BY-NC-SA 2.0)