It’s been awhile (more than 6 months, in fact) since my last post that focused on food satire. So, it’s time for another laugh at the habits, restaurants, and foods that we love, hate, and/or love to hate. Courtesy of The Onion, check out these recent stories:

“When it comes to manually compressing a towering heap of meat, cheese, and bread into manageable bites, U.S. residents are far more adept than their peers in other nations,” said lead researcher Hugh Newell…. 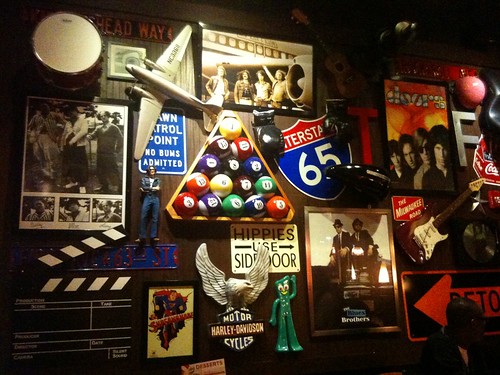 “In retrospect buying game-used, Babe Ruth–autographed baseball bats to display in each of our 900 locations was probably a mistake,” said company president Ricky Richardson, who confirmed the casual dining establishment had laid off more than half its staff, beginning with the thousands of full-time curators it employed to maintain its massive collection of memorabilia.

“Normally, having more than one Buffalo Wild Wings in a single municipality isn’t remotely feasible from an economic standpoint, but in Peoria, which is essentially the very definition of a boomtown, it’s almost expected,” said University of Chicago economist Robert Lucas….

Her senses bewitched by the intoxicating memory of peppermint-flavored syrup, local woman Kate Nothern saved herself from the bitterest of agonies Friday morning when, regaining control of her faculties in the nick of time, she stopped herself from imagining the taste of a peppermint mocha on her tongue.

It’s been awhile since I offered a purely comic post. So, let’s take a look at the American food system via some recent articles in The Onion (“America’s Finest News Source”). Click the headlines below for the full stories.

“We found that 70 percent of students in wealthy communities were not receiving their recommended allowance of eggs Benedict and fresh-squeezed orange juice,” Agriculture Secretary Tom Vilsack told reporters Friday.

“Time is definitely not on our side here,” said [the 28-year-old leader of the emergency operation, Jason] Larkin, who noted that the submerged chip segment is only getting soggier by the minute. “The isolated chip is currently holding up pretty well, given the circumstances, but it’s slowly absorbing more and more of the salsa, and there are a couple of smaller chip fragments in the immediate area. These factors will make it increasingly difficult for this second chip to get everything out of there cleanly.”

“Now, don’t get me wrong, our food has always been gross, but we asked ourselves, ‘Could we lower the bar even further?’” [Boston Market CEO George Michel] said. “Five years ago, people could cut into a piece of our famous chicken and maybe guess whether it was white or dark meat. Now, it just looks like one clump of some sort of compacted food product. In the past, the mashed potatoes tasted like instant, but could we get them to taste like the kind served to prisoners in the federal penitentiary system? The answer is yes. And could the fluid our sweet corn sits in for hours on end become greyer and murkier? I’m happy to say it could.”

For more, check out my earlier post on Portlandia’s “Ordering the Chicken” sketch, and then head to this post for a couple more really entertaining videos on two new products: “Almost Pizza” and “Brunchables.”

Holiday parties are just around the corner, and holiday shopping is well underway (if retailers’ prayers are being answered). With that in mind, I offer this bracing post from Drew Magary at Deadspin. His “Hater’s Guide To The Williams-Sonoma Catalog” lambastes everything from the Acorn Twine Holder ($26) to Callie’s Charleston Biscuits ($56.00 – $76.00), though he finds himself helplessly weak-kneed at the sight of the Holiday Chocolate Sampler ($29.95). If you’re not a fan of an occasionally foul-mouthed 30-something ranting at bourgeois excess, you might want to skip this one. Everyone else should head here for a few laughs—and maybe some gift ideas?

P.S. My favorite quote from the comments section: “Now, I would never be adept enough to make these myself, but I’ll be a monkey’s uncle (who uses that phrase?) if I will let anyone bad mouth the Ebelskiver.”

Little did J and I know that when we picked up some Peggy’s Organic Pickled Beets this weekend, we were laying the groundwork for our celebration of International Pickle Week.

As Food Republic’s Jess Kapadia snarkily suggests, this seems like one of those events from the “International Association of Dumbass Food Holidays,” but I viewed it as an excuse to say yet again what a fan I am of the IFC sketch comedy show, Portlandia.

Check out the YouTube video below before IFC claims copyright violation and asks Google to take it down.

And, head to this Portlandia site where you can pickle any webpage!

The first, from last week’s Saturday Night Live, is an ad spoof for Almost Pizza. My favorite touch: the sound of a slice hitting the floor.

The second, from CollegeHumor, has youngsters digging in to hipster Brunchables made by “Oscar Mayer Brooklyn.” My favorite quotes are too numerous to list them all, but they include “My mom forgot to make us brunch because she’s at kickball” and “From my brain to Paul Krugman’s op-ed.” Watch and enjoy it yourself here.

As a followup to yesterday’s post, which included a clip from the IFC show “Portlandia,” I thought I’d share another one of my favorite “Portlandia” sketches, which also happens to be food-related.

If you haven’t seen the show, it’s the brainchild of Carrie Brownstein (Wild Flag, Sleater-Kinney) and Fred Armisen (SNL). Like many sketch-comedy shows, the bits can be hit-or-miss, from not really funny to honest LOL. Season 2 recently got underway, though the clip below is from the series premiere last year. In this sketch, Brownstein and Armisen play a couple out to dinner who want to know exactly how the chicken on the menu was raised. Perhaps it is possible to take being a conscientious omnivore a bit too far…

P.S. “Part 1” in the video name tantalizingly suggests there’s more of this bit to be had, but sadly it’s not available on Hulu, which is how cable-free, not-media-thieving households like mine watch the show. Thanks to Google, though, I discovered that (not surprisingly) part 2 features the couple visiting “Colin” on the farm, so let your imagination fill in the blanks.

This story from The Onion, entitled “Continued Existence Of Edible Arrangements Disproves Central Tenets Of Capitalism,” really says it all. What more is there to add?