A new report [PDF] highlights research at the University of Wisconsin-Madison that’s meant to contribute to the success of organic farming in our state (and beyond). As Bob Mitchell writes for UW-Madison News,

The report, published by the UW-Madison Center for Integrated Agricultural Systems (CIAS) and the Wisconsin Department of Agriculture, Trade and Consumer Protection, summarizes 23 studies conducted by researchers in the university’s College of Agricultural and Life Sciences (CALS) in partnership with farmers across the state. The scientists are evaluating production practices for many of the state’s main agricultural products — dairy forages and pasture, soybeans, potatoes, vegetables and fruits, among others — as well as farm management and marketing.

The report also takes a more in-depth look at how some of the organic research projects have benefited the state’s farmers.

The study summaries make for pretty interesting reading. For example, Mitchell highlights efforts to develop an organic, no-till system that’s been 8 years in the making. Another that caught my eye in the report is an ongoing USDA-funded program to develop better organic carrots; as its summary explains,

Significant progress has been made in carrot breeding for conventional production systems, such as breeding for nutritionally superior varieties across multiple color classes including orange, red, purple and yellow. While these high-value carrot varieties are in demand, much of this germplasm has not been improved for organic systems. Organic producers need varieties that germinate rapidly with good seedling vigor, compete with weeds, resist pests, take up nutrients efficiently and are broadly adapted to organic growing conditions.

For more, check out Mitchell’s overview and the full report [PDF]. 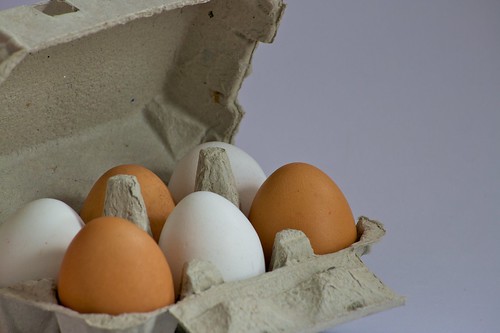 Yesterday my favorite NPR reporter, Dan Charles, took a look at the organic egg industry. More specifically, he provided the answer to a question recently posed in the face of some empty shelves at a Whole Foods: where are the organic eggs? As he describes,

Demand for organic eggs is indeed increasing, but production is also down.

The reason behind that shortfall highlights an increasingly acute problem in the organic industry.

It’s led to the following situation, which on the face of it seems bizarre. The U.S., a soybean superpower, ships conventional soybeans all over the world to feed animals in places like China. Meanwhile, in China, farmers are growing organic soybeans and sending them here.

Those expensive, imported soybeans are one of the reasons some domestic farmers have suspended organic egg production. The full story, which considers why Chinese rather than US farmers are growing organic soybeans for our egg layers, is worth a read (or listen). Find it here.

Q. So basically I’m calling because I read in the New York Times that you are making money, and I want to know why we don’t just see a wholesale conversion of agriculture to look like T & D Willey Farms?

A. There are certainly many other people like myself that are operating profitable organic farms of modest scale. But why is there not more proliferation of the modest-sized farms that are financially successful?

I think there’s a conundrum with the legions of young people being attracted to local and organic agriculture. They seem to be a bit hesitant about getting involved in what I call production agriculture, which is feeding a hell of a lot of people besides yourself. And they seem to be more strongly attracted to the Jeffersonian concept of having your little piece, your couple of acres, and farming mainly for self-sufficiency and some very small-scale marketing in their community.

One of the reports I’m getting from young people who have been through some renowned organic farm schools or internships is that they are not learning much about farm economics. I think that’s a real disservice. If they came to my school — if I had one — they’d learn a hell of a lot about that, particularly from my wife.

It’s a fascinating read, whether or not you have dreams of working the land, so check out the full interview here. For more on T & D Willey Farms, check out this Sunday NYT Magazine piece by Mark Bittman, which I blogged about awhile back. Tom Willey is also briefly quoted in this recent NYT article by Carol Pogash, titled “The Elders of Organic Farming,” that takes readers to a recent retreat attended by some organic pioneers. 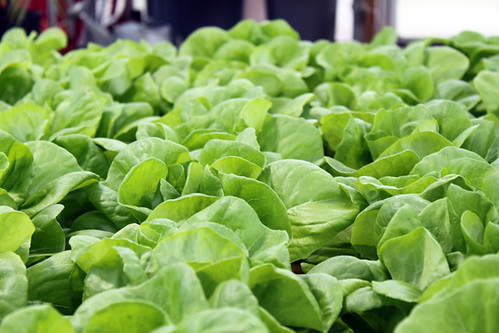 Thanks to a post at The Atlantic, I learned about a venture to provide jobs in organic agriculture to young men and women with autism spectrum disorders. As Green Bridge Growers CEO Jan Pilarski describes at HuffPost,

my oldest son, Chris, who has autism, graduated from college with degrees in chemistry and environmental studies. Chris is a highly capable young man, but the social challenges of being in a traditional job were very hard for him. After only several months as an environmental researcher, he was asked to resign despite his best efforts at self-advocacy. Clearly, he needed a different path to apply his talents in the world of work.

When he returned home after losing his job, we thought and dreamt and talked. As we helped Chris transition back home, we made a sobering observation: nearly all of his peers with autism were chronically unemployed despite having post-secondary degrees. Our world seemed small and bleak, and Chris’ future quite uncertain.

It was food that slowly brought us back to life. Meals shared, cooking lessons, tastes savored in the kitchen. Food became our saving grace during difficult, soul-searching days. And then we considered the place food played in Chris’ life, and saw a pathway to his future.

As she details, that pathway has been an aquaponics program, in the Growing Power model. As Pilarski notes elsewhere,

Our way of addressing the problem of unemployment [among people with autism spectrum disorders] may not be perfect. Traditional employers need to step up and hire people with autism because of the outstanding assets they bring to their work. But for us, creating Green Bridge Growers was what we needed to do right now to benefit Chris and others in our community.

For more details (and a video), check out the links above, then contribute to their fundraising efforts here. There’s some swag to be had at various contribution levels, so consider making a donation in someone’s name for the holiday gift that will keep on giving! 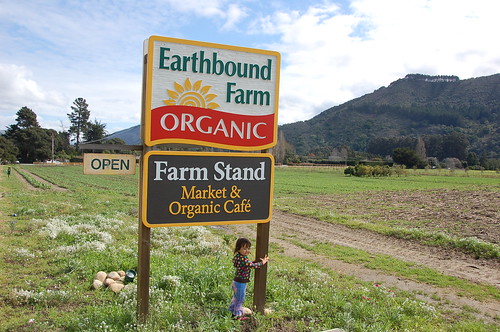 Ari LeVaux has a great article at AlterNet that considers the possible implications of a significant purchase in the organic food business. Specifically,

WhiteWave, maker of Silk soymilk, is purchasing San Juan Bautisa-based Earthbound Farm, the nation’s largest producer of organic produce. Organic industry observers are wondering what the fallout of this consolidation, announced December 9, will be….

Earthbound Farm, which started in 1984 with a rented raspberry patch and a farm stand, went on to transform the way America eats salad. Today it controls 60 percent of the bagged organic salad market, which it helped pioneer….

[S]ome are forecasting dark clouds over the WhiteWave buyout, as it invokes the specter of Dean Foods, the nation’s largest dairy. Soon after purchasing WhiteWave in 2002, American organic soybean growers, who had been supplying Silk’s primary raw material, were told they had to meet the price of Chinese organic soy, which was lower. Organic soy is labor-intensive, American farmers couldn’t go that low, so Silk began sourcing from China. The company amassed a commanding share of the organic soy milk market, before pulling a stealth bail on organic.

Silk switched its supply again, back to the U.S., and to conventional soybeans. New product offerings from Silk were not organic, and the flagship product was downgraded as well, with “organic” being replaced by “natural.”…

WhiteWave says it plans to run Earthbound as a separate business unit, with no significant operational changes planned, and has expressed interest in keeping [Earthbound founders] Myra and Drew Goodman on board as advisors. Similar promises were made to WhiteWave/Silk founder Steve Demos.

The full piece is an eye opener; check it out here.

For want of a decent cup of hot chocolate when out with friends, Dan Bieser now finds himself in the organic-chocolate business.

His start-up company, Tabal (ta-BAHL), makes small-batch, stone-ground chocolate bars from cacao beans he imports from a half-dozen Latin American countries. It’s grown from a hobby to a business that sells its chocolate in six retail outlets, including Amaranth Bakery & Cafe and Outpost Natural Foods, as well as online.

“I guess it all started because I’m not a coffee drinker,” said Bieser, a longtime educator whose main occupation now is in curriculum and grants for Growing Power. Going out with friends for coffee, he’d make do with packets of instant hot chocolate.

It got him interested in chocolate, and he joined a friend at a chocolate-making class in Toronto in March 2012.

A few months later, Bieser incorporated Tabal, and in January he began leasing space in the building housing Amaranth Bakery, 3329 W. Lisbon Ave., so he would have a licensed commercial kitchen to work from.

Head here for the full story, which includes photos by Rick Wood, and here for the sidebar that details Bieser’s chocolate-making process. For more, check out Tabal’s website (which is experiencing difficulties as I write) or find them on Facebook and Twitter.

George Hesselberg recently reported for the Wisconsin State Journal on a small but costly blow that organic farmers will soon be dealt. As he details,

It may seem like small potatoes to some, but about half of the certified organic farmers in Wisconsin will not get an annual federal subsidy of up to $750 to help cover the cost of getting their operations inspected, a necessary step in being certified organic.

Usually, the deadline to apply for the subsidy is the end of October, so many farmers just now are realizing that, after nearly 10 years, it is gone. Beginning and transitional organic farmers will suffer the most, as will some small businesses that must be certified to handle those products, experts say.

At midnight Monday, [September 30,] a nine-month extension of the latest version of [the federal Farm Bill] expired, which means for the moment, the law reverts to its 1949 version.

MacKenzie Bailey with the Ohio Ecological Food and Farm Association says the ongoing insecurity over the bill makes life harder for organic farmers.

For more, check out Wallace’s brief story and Hesselberg’s article.