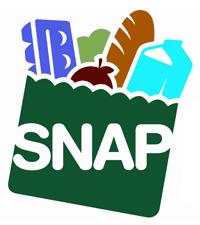 Logo via USDAgov on Flickr, used under a Creative Commons license (CC BY 2.0)

In the latest piece of reporting to come from FERN, Christopher D. Cook examines the current debates and impending cuts facing the federal Supplemental Nutrition Assistance Program. He writes,

In September, just two days after a Census Bureau report showed that food stamps helped keep 4 million Americans out of poverty last year, the US House of Representatives approved a $39 billion cut to the program (known as the Supplemental Nutrition Assistance Program, or SNAP) over the next decade….

Although the Republican-controlled House cuts are unlikely, given a promised veto from President Obama, food stamps will still be slashed by $5 billion on Nov. 1, when the 2009 Recovery Act that increased the aid along with other stimulus spending expires. The 13.6 percent temporary boost in food stamp dollars helped more than half a million Americans escape food insecurity, and millions more to climb out of poverty—4.7 million in 2011 alone, according the Center on Budget and Policy Priorities (CBPP).

He goes on to consider ways that the SNAP program benefits more than just direct recipients. As he summarizes,

Extensive research shows food stamps are a highly effective investment delivering big returns for all Americans, not just the poor. SNAP not only provides an economic and nutritional lifeline for low-income Americans, it also creates a significant boon to the wider economy.

For all the details, plus some great infographics (by Jaeah Lee) and tons of links, head here to Mother Jones.

George Hesselberg recently reported for the Wisconsin State Journal on a small but costly blow that organic farmers will soon be dealt. As he details,

It may seem like small potatoes to some, but about half of the certified organic farmers in Wisconsin will not get an annual federal subsidy of up to $750 to help cover the cost of getting their operations inspected, a necessary step in being certified organic.

Usually, the deadline to apply for the subsidy is the end of October, so many farmers just now are realizing that, after nearly 10 years, it is gone. Beginning and transitional organic farmers will suffer the most, as will some small businesses that must be certified to handle those products, experts say.

At midnight Monday, [September 30,] a nine-month extension of the latest version of [the federal Farm Bill] expired, which means for the moment, the law reverts to its 1949 version.

MacKenzie Bailey with the Ohio Ecological Food and Farm Association says the ongoing insecurity over the bill makes life harder for organic farmers.

For more, check out Wallace’s brief story and Hesselberg’s article.

Photo by lyzadanger via Flickr, used under a Creative Commons license (CC BY-SA 2.0)

Twilight Greenaway, the food editor at Grist from 2011 to 2012, wrote a really nice piece about the danger of smug, break-your-arm-from-patting-your-own-back-so-hard food righteousness that plagues a small minority most of the time and the rest of us thoughtful eaters at least some of the time. As she describes,

I wrote a post about a campaign by the Consumer’s Union to convince several major grocery chains to stop carrying meat from animals raised with antibiotics, and one commenter said, “GO VEGAN.”

These comments make perfect sense. If you want to see less support for factory farms, I think going vegan can be a great choice (this is not an anti-vegan rant). But it doesn’t really matter what the post is about. There will generally always be someone, if not many people, there to tell us that this or that huge systematic problem shouldn’t bother, let alone interest, them because they’ve already taken their “five easy steps” to fix it on a personal level. And more often than not, I find that people’s gut responses to stories that fall into the “food politics” category fail to reflect the fact that food is both personal and the product of industry, public policy, and a whole host of systems that we have the opportunity to look critically at (and, in doing so — ideally — change).

For a very long time our food system was essentially opaque, so individual choice was all most of us had. And I certainly understand that not everyone will care about the amazing array of tools for connecting the dots from personal to systemic change. But I’d argue that if we practice the former without the latter, sooner or later we’ll end up in a safe but limiting cul-de-sac where very little actually happens.

The full piece is great food for thought and includes some super links, so check it out here.

The Conscientious Omnivore is away. This is an encore presentation of a post that originally appeared in slightly edited form on July 19, 2012.

Kate Prengaman of the Wisconsin Center for Investigative Journalism recently produced an in-depth report looking at important water use issues in the Badger State. She writes,

In a state with about 15,000 lakes and more than a quadrillion gallons of groundwater, it is hard to believe that water could ever be in short supply. Experts say, however, that the burgeoning number of so-called high-capacity wells is drawing down some ground and surface water, including the Little Plover River and Long Lake.

In the early 1950s, there were fewer than 100 high-capacity wells in the Central Sands, according to the state Department of Natural Resources. Today there are more than 3,000 — 40 percent of the state’s total — in the six-county area.

Officials at DNR say that legally, they cannot block new wells based on the impacts from existing wells. And lawmakers want to keep it that way.

Prengaman effectively details current political battles over whether and how to protect water resources, alongside consideration of the competing demands being placed on Wisconsin water.

Experts say the implications of overpumping are on display across the state.

In the Madison area, the deep aquifer is down almost 60 feet. Waukesha’s withdrawals have pushed the deep aquifer down 600 feet. Green Bay had to tap Lake Michigan after depleting its groundwater in the 1950s.

In the Central Sands, scientists say that a rapid expansion of irrigated agriculture may be largely to blame — setting the stage for a water fight between farmers and those who fear for the region’s lakes, rivers and wetlands.

“We were all raised with the sense that this is Lake Superior underneath us, and it’s not,” said Justin Isherwood, a farmer with about a dozen high capacity wells for irrigating his 1,400 acres of potatoes and other vegetables in Portage County.

Tensions have sprung up over how to allocate a finite water resource to many legitimate uses: municipal water supplies, industries, irrigation, private wells, lakes and streams.

To some, it comes down to this: Who needs the water more — the potato plants or the trout?
For those, like Isherwood, who love both, finding a solution involves hard questions.

The full story is outstanding; find it here.

Yesterday, Katherine Paul and Ronnie Cummins of the Organic Consumers Association analyzed at AlterNet the possible effects of two international trade agreements currently in the works. As they explain,

Designed to grease the wheels of world commerce, the Trans-Atlantic Trade and Investment Partnership (TTIP) and the Trans-Pacific Partnership (TPP) would force the U.S. and other participating countries to “harmonize” food safety standards. That means all countries that sign on to the agreement would be required to abide by the lowest common denominator standards of all participating governments….

Both the TTIP and TPP could have dangerous consequences for food safety in the U.S., and around the world…. From day one, negotiations for the TTIP and TPP have been shrouded in secrecy. The public and participating governments, including the U.S. Congress, have been shut out of the negotiating process, denied access to everything from early proposals to final draft texts….

If the public is shut out, and Congress gets no say, who gets a seat at the table? Corporations. That’s right.

The article is written with the urgency of folks who care deeply about the state of our food supply; even though the rhetoric gets a bit heated at times, it makes for pretty compelling reading. Find the full piece here.

Finally, lest you doubt Paul and Cummins’ analysis that these agreements favor corporations, see what the folks at The Economist had to say in this op-ed from February:

[A]s the cautious Mr Obama’s willingness to gamble on this shows, the best time to push [for the TTIP] is now. Some of the most obstreperous lobbies have been giving ground. The EU recently opened its market to imports of live pigs and certain types of treated beef from America, suggesting that it may at last be possible to make progress on trade in genetically modified products…. The only reason for business not to throw everything it has behind TTIP would be if there were a bigger global trade pact to be had. Sadly, there is not. Done properly, a US-EU deal could even create a bit of momentum for other pacts, including agreements with Asian trading partners. And that potentially might lead to a new round of global trade talks.

Photo by cheeseslave (Ann Marie Michaels) via Flickr (CC BY 2.0)

It’s nearly December, but I’ve just now gotten around to reading Mark Bittman’s column about the food-related ballot initiatives that were voted down earlier this month on election day. It’s worth a read for both its sobering take on the influence of money in politics and its optimistic discovery of a silver lining in the election results. He introduces the former topic this way:

Proposition 37, which would have required packagers to label foods containing genetically modified organisms (G.M.O.’s) as such, was on the ballot in California. As recently as two months ago, the vote for labeling appeared to be a shoo-in. But then the opposition spent nearly a million dollars a day — a total of $46 million, or about five times as much as the measure’s backers — not so much chipping away at the lead but demolishing it.

Check out the full piece here.

Over at Grist, Tom Laskawy posted a piece yesterday in the wake of President Obama’s reelection entitled “Will Obama’s second term bring food system wins — or more of the same?” He takes a look back at the President’s first term in office as it relates to federal food and agricultural policy, and then casts an eye to the next four years. As Laskawy notes near the end of the post,

As for the USDA, my expectation is that [Secretary] Tom Vilsack will stay on — he has hinted he’s willing. With this year’s farm bill process still incomplete, it would be a clear case of switching horses midstream — which is never a good idea. I would also expect that his deputy, Kathleen Merrigan, will remain in place, in order to build a permanent infrastructure for the support of local and regional food within USDA through her Know Your Farmer, Know Your Food program and other below-the-radar efforts.

I’m not expecting miracles, however….

Head here for the full piece, which is a thoughtful read and includes plenty of great links.

Then, for Tom Philpott‘s assessment of “The 5 Unfinished Items that Will Shape Obama’s Food-and-Ag Legacy,” head to Mother Jones.