A new report [PDF] highlights research at the University of Wisconsin-Madison that’s meant to contribute to the success of organic farming in our state (and beyond). As Bob Mitchell writes for UW-Madison News,

The report, published by the UW-Madison Center for Integrated Agricultural Systems (CIAS) and the Wisconsin Department of Agriculture, Trade and Consumer Protection, summarizes 23 studies conducted by researchers in the university’s College of Agricultural and Life Sciences (CALS) in partnership with farmers across the state. The scientists are evaluating production practices for many of the state’s main agricultural products — dairy forages and pasture, soybeans, potatoes, vegetables and fruits, among others — as well as farm management and marketing.

The report also takes a more in-depth look at how some of the organic research projects have benefited the state’s farmers.

The study summaries make for pretty interesting reading. For example, Mitchell highlights efforts to develop an organic, no-till system that’s been 8 years in the making. Another that caught my eye in the report is an ongoing USDA-funded program to develop better organic carrots; as its summary explains,

Significant progress has been made in carrot breeding for conventional production systems, such as breeding for nutritionally superior varieties across multiple color classes including orange, red, purple and yellow. While these high-value carrot varieties are in demand, much of this germplasm has not been improved for organic systems. Organic producers need varieties that germinate rapidly with good seedling vigor, compete with weeds, resist pests, take up nutrients efficiently and are broadly adapted to organic growing conditions.

For more, check out Mitchell’s overview and the full report [PDF].

Photo by TooFarNorth (Karyn Christner) via Flickr, used under a Creative Commons license (CC BY 2.0)

“Growing Future Farmers,” a highly informative piece by Erik Ness for the UW College of Agricultural and Life Sciences (CALS), describes the challenges of finding and preparing a new generation of farmers, as well as the CALS programs that are helping to confront those challenges. One of my favorite sections is the following:

“Since 1995 [Dick] Cates has run the Wisconsin School for Beginning Dairy and Livestock Farmers, a hands-on seminar series conducted as a joint program of the Farm and Industry Short Course and CIAS [the Center for Integrated Agricultural Systems]. By focusing on business planning and pasture-based management, the school provides an accessible and sound financial approach for the beginning farmer.

“One key for new farmers, says Cates, is managed grazing. In a typical confinement feed operation you have to plant, cultivate, harvest, dry and store the feed. Then you have to take it out of storage, feed the cows, and remove and distribute the manure. It takes a lot of labor, equipment and fuel.

“Grazing advocates like to joke they hire the cows to do all that. By providing a lower capital approach, grazing allows for a farm that can reasonably be owned by a family just starting out. ‘Your business is turning sunshine into grass into milk or meat,’ says Cates. ‘You can make it as complicated as you want, but those are the essentials.'”

Among other educational programs, the story describes a new formal apprenticeship aimed at promoting managed grazing and another that seeks to help farm families with generational transfer, a process that can be difficult in the modern era. The piece also touches on the topic of urban food deserts, describing federally funded research efforts at CALS “to analyze urban food systems to identify local innovations in food production and distribution—and then expand local production.”

It’s a somewhat lengthy article but well worth the read, so check it out here.

The Conscientious Omnivore is away. This is an encore presentation of a post that originally appeared in slightly edited form on March 2, 2012.

I just read another nice article in grow, the magazine of the University of Wisconsin-Madison College of Agricultural and Life Sciences (CALS). In it, Jill Sakai describes a wide range of CALS research on bees, on which we are dependent for much of our produce and whose fate is deeply intertwined with modern agriculture. For example, she writes that

Though the familiar honeybee originated in Europe, there are hundreds of native bee species that play critical roles in both agricultural and natural landscapes. “When we think of pollination we think of crop plants, but 95 percent of all flowering plants require insect pollination—and most of those are being visited by native pollinators rather than honeybees,” says [entomology graduate student Hannah] Gaines, who is conducting her work in the lab of entomology professor Claudio Gratton.

Her research has shown that, in general, more diverse landscapes have more bees. She has documented more than 200 species of native bees in Wisconsin cranberry fields—a surprisingly high number for a single crop.

Contrast this to a vast almond orchard in central California, where the only bees in sight are imported honeybees trucked in during bloom season. Though they may appear lush to human eyes, the vast monocultures that dominate major agricultural areas are virtual wastelands to a bee for the majority of the year.

Bees need just two primary resources: food and shelter. But the intensively managed landscapes of heavily agricultural areas often have neither. Groomed to maximize efficiency, such fields bloom simultaneously and have little uncultivated land with suitable bee habitat—undisturbed soil for ground nesters, hollow stems and snags for cavity nesters. Consider a large watermelon farm, Gaines says. “When the watermelon is in flower, there’s a huge resource for the bees, but when the watermelon’s not in flower, it’s a desert.”

It’s an informative piece; check out the full article here. 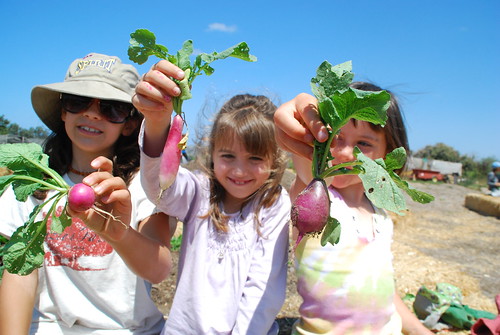 Joan Fischer recently had a nice piece in grow, the magazine of the University of Wisconsin-Madison College of Agricultural and Life Sciences (CALS). In it, she examines many of the challenges and successes of efforts to bring fresh, local produce into schools. For example, she notes that

And Wisconsin kids need that help. Nearly a fourth of high school students are overweight or obese. “Many children consume diets in which more than 25 percent of their energy comes from sugar, and one in three high school students consumes fruit or vegetables less than once per day,” notes [CALS nutritional sciences professor Dale] Schoeller. “This diet pattern is associated with excess weight gain. A change in the diet pattern is needed, and one place to start that change is in school meal programs.”

His study of Farm to School has made him a believer in the program not as a magic bullet but as part of a long-term strategy toward better eating habits.

“This is something that needs to be done more broadly and year after year,” Schoeller says. “It’s not like getting an inoculation—something that you do once and it lasts for years. It has to be constantly reinforced until it becomes an ingrained behavior.”

Find the full article here. For more on school lunches, check out some of my earlier posts here, here, and here.

The current issue [PDF] of grow, the thrice-yearly magazine from the College of Agricultural and Life Sciences at UW-Madison, includes a report from Erik Ness on how changes in weather patterns, likely due to global climate change, have been posing challenges for area farmers.

The growing season in Wisconsin has lengthened by two to three weeks over the last half-century—a big change over a short time. But because spring can be cold and late one year and early the next, some people tend to chalk it up to variability.

Agronomy professor Chris Kucharik BS’92, PhD’97 has no doubt that it’s climate change. Simply put, the earth is like a giant car, and increasing the amount of carbon dioxide is like rolling up the car windows on a sunny day….

Kucharik knows better than most how dense the science can get, but he is adamant that evidence for climate change is clear and overwhelming. In fact, he can even show how it’s helped agricultural productivity in some locations in Wisconsin over the last few decades. It’s not easy to tease out, because crop genetics and management practices have significantly improved over the same period. But trends in precipitation and temperature during the growing season from 1976 to 2006 explain more than a third of the variability in corn and soybean yield trends, he says.

The bad news is that this productivity trend might be hurt by continued warming without adaptive measures. Indeed, for each additional Celsius degree of future warming, corn and soybean yields could potentially decrease. With luck, modest increases in summer precipitation could offset this. Unless, of course, it fails to rain at all.

As the quote above suggests, Ness first considers the effects of difficult weather on major commodity crops like corn and soybeans. He also looks at the impact of this past year’s weather on cranberry growers:

On a sunny day in early June, Ed Grygleski’s cranberries are in bloom and the bees are busy. Two semi loads of hives arrived the previous week and already are settled in. Some of his fellow growers weren’t so lucky, and their bees are still in transit from other states.

Grygleski has never gotten bees in May before, but he’s also never seen a cranberry blossom on May 15th. “If I didn’t have all my bees right now I’d be screaming on the phone,” he says. “This is perfect weather for pollination.” The more blossoms the bees visit, the better the harvest.

Grygleski’s relaxed demeanor belies a crazy year. The mild March awoke his plants, but then it got cold again and stayed cold. He struggled for more than a month to protect the early vines—not always successfully.

“You can tell the color’s different, the vines just look sick,” he says, pulling up to a damaged bed. “The buds don’t grow out.” The bed will recover, but he estimates an 80 to 90 percent loss this year.

Head here for the full story.

I just learned about the Field to Foodbank program of UW-Madison’s College of Agricultural and Life Sciences (CALS), which has been working with folks involved in all aspects of Wisconsin agribusiness and food processing to turn excess produce into supplies for area food banks.

I was a little surprised that no fresh vegetables are delivered to food banks—perishables get canned to avoid the need for refrigeration—but I guess this makes sense given the huge amounts of produce involved. As explained in this interview by Jed Colquhoun (professor of horticulture and director of the Wisconsin Institute for Sustainable Agriculture), delivering a fresh crop to a food bank “isn’t terribly realistic when you’re talking about hundreds of thousands of pounds of carrots,” for example.

He continues, describing the involvement of a variety of Wisconsin businesses: “I remember sitting in a coffee shop in central Wisconsin, watching the logistic chain develop to get snap beans and sweet corn to Second Harvest without my involvement at all. Somebody in the room lined up trucking and asked when they could get somebody else’s harvester over there. The processor asked when they could can that produce and how they could get it down to Second Harvest. So are they generous? Are they engaged? Very much so. And they’re asking how they can do more. They’re in business, yes. But they’re in the business of providing food.”

For more, check out the full interview, watch the nicely produced video below, or—if you’re a UW-Madison student who wants to get involved—contact the official student organization.