Frank Morris recently produced a great piece for NPR about opposition to California’s efforts to improve the living conditions of egg-laying chickens. As he describes,

most U.S. hens live crammed into very close quarters, according to Joe Maxwell, with the Humane Society of the U.S. And he says that’s just wrong.

“There are some things we should not do to animals,” says Maxwell.

California voters felt the same way, and six years ago they passed Proposition 2, requiring California producers to provide cages that are almost twice as large as most chickens have now. The Legislature followed that with a law requiring that all eggs sold in California be raised under those conditions.

Six farm-country states have joined a lawsuit against California over the issue, with support from other parts of the animal-ag business. As Morris details,

Don Nikodim with the Missouri Pork Association calls it “a clear violation of the U.S. Commerce Clause.”

Now, why would pig farmers care about henhouse restrictions?

Because when a huge state like California slaps restrictions on food it imports, farmers all over the country become alarmed. And Nikodim says this won’t likely stop with eggs.

“Logically, the next step is, we should extend our authority on how you produce pork to other states as well,” he says. “Then is it dairy, is it beef, is it corn — go down the list.”

Nikodim is worried that restrictions on cramped pig stalls, called gestation crates, may come next.

Check out the full piece here.

Thanks to Rodale News, I just learned about a lawsuit against grocery chain Kroger over their house-brand, Perdue-raised “Simple Truth” chicken. As P.J. Huffstutter writes for Reuters,

“Looking to profit from growing consumer awareness of, and concern with, the treatment of farm animals raised for meat production, Kroger engaged in a deceptive and misleading marketing scheme to promote its ‘Simple Truth’ store brand chicken as having been sourced from chickens raised ‘cage free in a humane environment’,” according to the complaint.

“In fact, Simple Truth chickens are treated no differently than other mass-produced chickens on the market.”

As Emily Main explains for Rodale,

Cages are commonly used in factory-farm egg production, but rarely for chickens raised for their meat, also called broiler chickens. Broilers are frequently raised in large, enclosed—and, often, windowless—buildings, crammed in so tightly that the animals have little room to move, despite not being confined to cages. In those cases, the [“cage-free”] label has “virtually no relevance to animal welfare,” says The Humane Society of the United States.

Thanks to a story on NPR’s Morning Edition, I learned about a just-released piece of investigative reporting that examines the business practices behind much industrial meat production. As Dan Charles describes,

Christopher Leonard’s new exposé on the chicken industry, The Meat Racket [subtitled “The Secret Takeover of America’s Food Business”], doesn’t devote much ink to the physical object on our plate, the chicken meat itself.

Instead, Leonard focuses on the economic machinery that delivers the meat to us, or, as he puts it, “the hidden power structure that has quietly reshaped U.S. rural economies while gaining unprecedented control over the nation’s meat supply.” His book aims a spotlight at Tyson Foods, which helped create the modern chicken industry. And it recounts the stories of people, mostly farmers, whom Leonard contends Tyson has chewed up and cast aside since its incorporation in 1947.

Writing for Grist, Nathanael Johnson writes that the book

is a minor miracle of reporting. Tyson isn’t the sort of company that likes to show reporters around its operations. Its farmers are bound by contract — and cowed by fear of retribution — from showing anyone so much as a pay stub from the company. It’s secretive enough that we’ve known little about how the corporation operates, even though it touches everyone in America — economists have calculated that 5 percent of the average grocery bill goes to Tyson (which, beyond poultry, does a big pork and beef business as well). Leonard managed to penetrate that secrecy, and has painted an intimate picture of the company and the people who made it….

Farmers may be the most potent ingredient in Tyson’s formula. They work every day, live in near poverty, and gamble their savings on a chance to move up the American class ladder. It’s the farmers, prodded by Tyson’s competitive fee scheme, who pay for upgrades to chicken houses — well, farmers, along with taxpayers. The U.S. Farm Service Administration backs loans to poultry farmers and pays banks back when they default. In other words, we’re all subsidizing a churning rotation of bankruptcies that keeps companies like Tyson supplied with the newest infrastructure and a desperate labor force.

For more, check out the NPR piece (which includes some informative graphics and links), Johnson’s post, and an in-depth interview with author Leonard on AirTalk from public radio station KPCC. 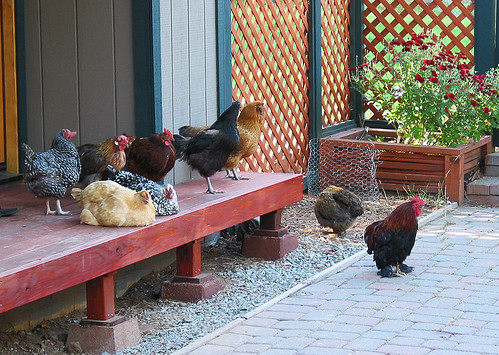 Photo by sierravalleygirl via Flickr, used under a Creative Commons license (CC BY-NC 2.0)

Over the weekend, NBC News ran a story from JoNel Aleccia on failed chicken stewardship on the part of some backyard-chicken enthusiasts. She writes,

Hundreds of chickens, sometimes dozens at a time, are being abandoned each year at the nation’s shelters from California to New York as some hipster farmers discover that hens lay eggs for two years, but can live for a good decade longer, and that actually raising the birds can be noisy, messy, labor-intensive and expensive….

It’s the same scenario at the Chicken Run Rescue in Minneapolis, Minn., where owner Mary Britton Clouse has tracked a steady climb in surrendered birds from fewer than 50 in 2001 to nearly 500 in 2012….

“It’s the stupid foodies,” said Britton Clouse, 60, who admits she speaks frankly. “We’re just sick to death of it.”

Folks on the chicken-sanctuary frontlines are dealing with the problem firsthand, but others say such issues represent the small minority of cases. As Aleccia reports,

advocates of home-grown chickens … say that a few negative incidents shouldn’t give a bad name to a practice that encourages both self-sufficiency and the consumption of sustainable food grown in a humane manner.

“We’ve experienced smell, noise, pests, etc., way more from improperly cared for dogs and cats than we have from backyard chickens,” said Rob Ludlow, owner of the fast-growing website, BackYardChickens.com, which started with 50 members in 2007 and now boasts 200,000 members. He is the author of three books, including “Raising Chickens for Dummies.”

“Hundreds of thousands of people are realizing the wonderful benefits of raising a small flock of backyard chickens, the pets that make you breakfast,” he said, noting that cities nationwide have agreed, passing ordinances making it legal to keep small flocks of urban chickens.

Head here for the full piece. And please, if you’re contemplating getting a backyard chicken or two, do your homework! The internet and bookshelves everywhere are full of resources to help you decide if being an egg farmer is really right for you.

Caroline Abels at Humaneitarian recently posted about Pastured Poultry Week, which takes place next week in Georgia and NYC. Like Abels, I don’t live near either of those places, but the week is worth celebrating nonetheless. She writes,

[Georgia] raises more chickens than any other — 1.4 billion a year – so before I became a humaneitarian I’m sure I ate a lot of this industrial export. Who knew the peach and peanut state is also the poultry state?

“Probably most Georgians don’t know that, either,” said Leah Garces when I called to ask her about Pastured Poultry Week, happening June 6-14 in Georgia and New York City. Leah is the director of the USA branch of Compassion in World Farming, a UK-based nonprofit….

Compassion in World Farming and a handful of other groups organized Pastured Poultry Week to draw attention to the imbalance in Georgia’s poultry production and possibilities for the future. “We want to be the number one producer of pastured poultry in the world,” Leah said, adding that she believes this is possible because a lot of farmland in Georgia isn’t being used. The goal of being number one may sound ambitious, but it starts with awareness events like PPW.

For more, check out Abels’ full post and the website of Compassion in World Farming. As CIWF suggests, “If you are not based in the Georgia or New York area, you can help to support pastured poultry by asking any restaurant that you dine in where their chicken meat comes from. To ensure higher welfare, only eat chicken meat that is raised on pasture.”

In a recent story for the rural Wisconsin publication, The Country Today, Alyssa Waters provides a window into the sort of challenges some farmers face when raising their livestock on pastures. She begins,

For much of his 58 years, Matthew Buvala has been trying to come up with ways to make life a little less difficult….

When he retired from the Navy after a 20-year career and started raising chickens on his 17 acres in 2001, he began a love-hate relationship with the movable, woven electric fencing used to corral his feathered friends. Eight years later the idea came to him — a fence cart that would hold the fence, lay it out neatly and pick it up with a lot less hassle than trying to do it by hand.

“I just figured there has got to be a better way of doing it than picking it up and moving it,” Buvala said.

It’s a neat little story, so check out the full article here.

This past weekend Chicago-area locavores had a chance to partake of the city’s first Urban Livestock Expo. Urban chicken consultant Jennifer Murtoff describes the event at her blog as “a smashing success, with a huge crowd of over 200 people…. The standing-room-only crowd gathered for information on keeping bees, goats, chickens, and rabbits in the city.” I didn’t make the trip down from Madison (I don’t think my fellow condo owners would get on board with livestock on the property), but local media outlets have run some related stories recently.

WBEZ’s Lewis Wallace takes a trip to the West Side to visit the home of one small-scale urban farmer. As the print version of her story describes,

From the street, Carolyn Ioder’s house on the western side of the Austin neighborhood looks pretty normal. It’s a large off-white stucco with an American flag hanging out front and a big trampoline crammed into a fenced-in backyard.

It’s the sounds from the garage that give it away. Inside her two-car garage, Ioder keeps one car, six goats and a small coop full of chickens. The animals live here year-round, and Ioder takes the goats to pasture daily in a vacant lot down the street. She has the owner’s permission, and she gets water for the goats from the Chicago fire station at the end of the alley.

“Goats are such flock animals, they like to be with each other but they’re also extremely bossy,” said Ioder, wrangling the goats onto leashes for their daily walk to pasture.

For more, check out the full piece here and the accompanying video (which is really a fun audio story with a nice photo slideshow) embedded below.

Then, if you’re more of a fan of local TV morning news than public radio, check out a visit by a reporter to one Chicago resident’s backyard chicken coop. In keeping with the classic morning news format, the story is spread across three separate segments, which you can find here, here, and here. Chicken expert Murtoff, along with the owner of a small flock of Black Australorps, are featured.