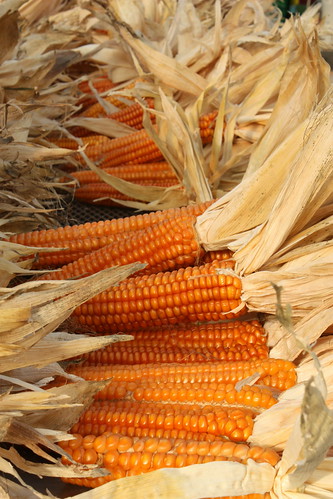 Last week while I was away (more on that in some forthcoming posts), I caught a story on NPR that focuses on a delicious heirloom variety of corn.

chef [Dan] Barber made an arrangement to start growing the New England heirloom corn at the farm next to his restaurant. And for the past eight years, farmer Jack Algiere has overseen its cultivation.

During my visit, Algiere showed me one of the golden-hued cobs still growing on the stalk. “It will turn a golden orange when it’s dry,” Algiere said.

The vibrancy of this yellowish-orange pigment is indicative of high concentrations of beneficial called carotenoids, which make this corn appealing for its nutritional value. And it’s also fairly high in protein.

So why did farmers stop growing this corn? For everything that New England Eight Row Flint corn has going for it in terms of flavor, its big downside is that it doesn’t produce many cobs. It’s a low-yield corn.

I highly recommend the full piece; check out text and audio versions here.

Mother Jones recently ran a fantastic piece by Rowan Jacobsen. (Thanks for the tip, R!)  Under the headline “Why Your Supermarket Only Sells 5 Kinds of Apples: And one man’s quest to bring hundreds more back,” Jacobsen examines the loss of countless American apple varieties:

In the mid-1800s, there were thousands of unique varieties of apples in the United States, some of the most astounding diversity ever developed in a food crop. Then industrial agriculture crushed that world. The apple industry settled on a handful of varieties to promote worldwide, and the rest were forgotten. They became commercially extinct—but not quite biologically extinct.

Even when abandoned, an apple tree can live more than 200 years, and, like the Giving Tree in Shel Silverstein’s book, it will wait patiently for the boy to return. There is a bent old Black Oxford tree in Hallowell, Maine, that is approximately two centuries old and still gives a crop of midnight-purple apples each fall. In places like northern New England, the Appalachian Mountains, and Johnny Appleseed’s beloved Ohio River Valley—agricultural byways that have escaped the bulldozer—these centenarians hang on, flickering on the edge of existence, their identity often a mystery to the present homeowners. And John Bunker is determined to save as many as he can before they, and he, are gone.

The article is a great read and will inspire you to seek out new apple varieties. Check it out here, along with an accompanying post from editor Sarah Zhang on an amazing pair of books from more than a century ago (and available for free online) titled The Apples of New York.

For more, check out this episode of Wisconsin Foodie that features Brightonwoods Orchard and ÆppelTreow Winery & Distillery of Burlington, Wisconsin.

the seedsman from Missouri seemed pleasantly surprised by all the fuss when asked recently about the meteoric growth of the business he began just 14 years ago, when Baker Creek Heirloom Seeds sent out its first mail order catalog. That was 1998. He was 17….

I began by asking him about the book he published last fall … According to The Heirloom Life Gardener, which was lovingly illustrated with hundreds of exquisite, mouth-watering photographs of produce from the Baker Creek gardens taken by Jere and others, heirlooms matter for a number of reasons, not least of which is that they tend to taste better than hybrid varieties.

It’s a nice article and includes lots of great links, so check it out.